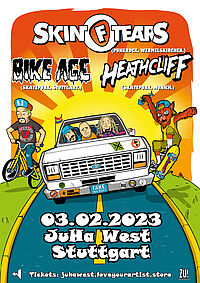 Dear Friends. Times change. Lifes change. People change. The 17-year-long journey of the individuals calling themselves Black Shape of Nexus and later Bellrope has ended. We won't bother you with an emotional recap you've read a hundred times before. It is like it is.

Malte on behalf of Geb, Marco and Michael. Love to Jan, Stef, Marius and Ralf. 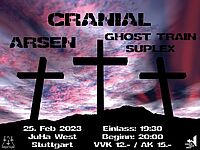 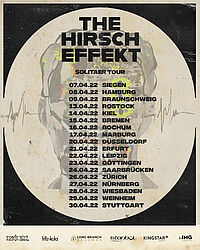 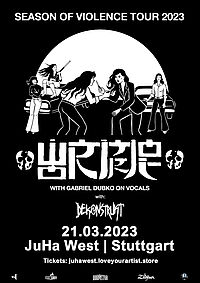 WORMROT RETURNS TO EUROPE IN 2023. In support of their latest album HISS, WORMROT will embark on an extensive 2-months tour with Gabriel Dubko of IMPLORE filling in as vocalist.

"We can't wait to get back on the road. It'll definitely be a new and interesting dynamic with Gabriel on board. Our shows will be as explosive as before, that I promise." - Rasyid Juraimi 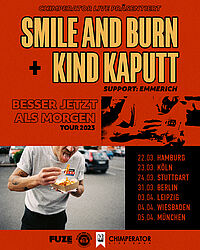 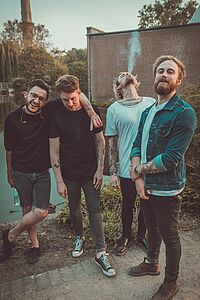 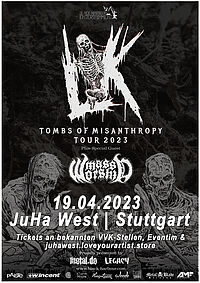 Sweden has long been held in high regard as one of the hotbeds of global death metal. With their third full-length, Stockholm’s Lik only add fuel to this fire. “The title of the record is Misanthropic Breed, because it describes the world today and the generations that are emerging,” states vocalist/guitarist Tomas Åkvik. “In a way it’s more applicable than ever with the quote ‘It’s every man for himself’ being so suitable, and it’s also a ‘hidden’ homage to both Dismember and Entombed.“
The quartet – rounded out by guitarist Niklas “Nille” Sandin, drummer Chris Barkensjö and bassist Joakim “Myre” Antman – who take their name from the Swedish word for ‘Corpse’, had their work cut out for them following up their career best, 2018′s Carnage. “Carnage is still a record that we are really proud of, it’s a lot of cool songs that brings you right back down memory lane to where it all began even though they were newly recorded, and we played a lot of cool gigs and met a lot of really nice people touring it.” They had no specific plan going into the writing sessions for what would become Misanthropic Breed, just to “write new Lik songs with the ambition of kicking the older albums’ asses.” Having made his recording debut with 2019′s STHLM Death Metal EP, this was Antman’s first full-length with Lik and his presence only improved the great ideas the band were coming up with. “The feeling of Misanthropic Breed is that it goes from sometimes very melodic stuff to very dark and eerie landscapes. We still have the ‘Iron Maiden’ feeling but I think it’s a lot darker at times. Sound-wise it’s more brutal but still very clear and you can hear what’s going on almost all the time, and the songs have a more mature feeling and are more straightforward.”
Far darker in tone and with fewer jokes than included on their previous releases, when it came to lyrical subject matter the band were influenced partially by movies and books, but most of their inspiration came from looking back at their own catalogue. “The songs are inspired by older Lik songs, and where we could take a new direction from that. Of course there are other bands that we love involved as well, but for example, “Female Fatal to the Flesh” is an evolved take on “The Deranged” from Carnage mixed with “Skin Necrosis” from Mass Funeral Evocation (2015) while “The Weird” is an even more brutal “Ghoul” from the same record. Then there’s “Corrosive Survival” which was inspired by the disaster of Chernobyl, and “Morbid Fascination” is like a Metallica/Entombed/Dismember track which turned out really cool. I think the main inspiration is still drawn from old school death metal, which we think is how death metal should be played.” Having planned to track the record at Stockholm’s Solna Studio’s the band’s intentions were derailed by the Covid-19 lockdowns, and they were forced instead to record it at their rehearsal space, but this did not prove to its detriment. “The question as to whether what we’re doing is good enough gnaws at us through the whole process when we make an album, and it was frustrating sometimes that things didn’t work out the way we wanted, but I think our producer Lawrence Mackrory (Obey Mastering) did an awesome job of pulling us through the whole thing. So all credit goes to him.” Given the quality of the finished product and the fact they have superseded all of their previous recordings the quartet really should not have worried if what they were doing was up to their high standard, and it opens the door to the next exciting phase in the existence of one of Sweden’s heaviest exports. 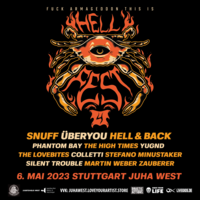 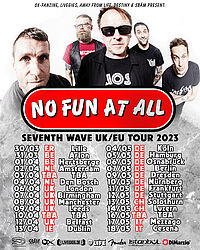 NO FUN AT ALL | clubCANN!

October 2022 saw the release of No Fun At All's seventh studio album, appropriately named "Seventh Wave".
The Swedes have kept us waiting for new material for four long years, but now the time has finally come! Even after more than 30 years of band history, No Fun At All are still far from running out of ideas. After their last studio album Grit (2018) they duly follow up with 12 new songs on "Seventh Wave". Founded in 1991 in Skinnskatteberg, Sweden, NFAA quickly found their own punk sound and made a name for themselves far beyond the borders of Sweden. Alongside Millencolin and Satanic Surfers, they became - and still are - one of the biggest Swedish punk bands. 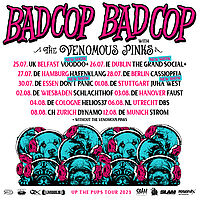 BAD COP BAD COP [FAT WRECK]
Bad Cop Bad Cop has done angry. The band’s 2017 full-length, Warriors, was recorded in the aftermath of the 2016 presidential election. The Los Angeles quartet’s new full-length, The Ride (Fat Wreck Chords, June 19th), shows what happens when you come out the other side of that anger.

“It’s not that I am just stoked or blind to suffering,” says singer-guitarist Jennie Cotterill. “I think anger is a legitimate and understandable reaction to injustice and wrongdoing. It’s just that for myself, I am trying to move past ‘reaction’ into productive ‘response.’”

The message BCBC is sending this time around is less about wagging your finger at others, or giving the middle one to the Man, than it is about self-love and acceptance. As Cotterill puts it, “Love is a more powerful truth than anger.” That positivity fuels many of The Ride’s tracks: “Originators,” “Simple Girl,” “Community,” “I Choose,” “Perpetual Motion Machine,” and “The Mirage” exude confidence, gratitude, and compassion. In 2020, such things qualify as contrarian.

"These are political statements—self-love is a huge fucking statement," affirms singer-guitarist Stacey Dee. "Self-love means putting a fix on the problems at home before trying to fix everything in the world. It's asking people to find it in themselves to create the life that they really want to have so they're not in turmoil, so they're not in a place of stress and sickness."

Dee speaks from experience. In 2018 she was hospitalized twice for different ailments, then discovered she had stage one breast cancer at the end of the year. Fortunately it was highly treatable, but the experience was life-altering. Dee captures it with brutal frankness on “Breastless,” whose bright melodies belie the struggle described in the lyrics.

“Certain Kind of Monster” and “Pursuit of Liberty”—both written and sung by bassist Linh Le—are blistering repudiations of the current administration’s treatment of immigrants.

The former is an imagined conversation with an ICE agent, and the latter juxtaposes her family’s immigration to the U.S. from Vietnam in 1975 to current events, something she’s never explored musically.

The perspective behind The Ride lends it an undeniable maturity, without losing its power. Recorded throughout much of 2018 and 2019 by Johnny Carey and Fat Mike of production team the D-Composers, the album boasts all of the elements of BCBC’s sound: big guitars, lock-step bass and drums (the latter by powerhouse drummer Myra Gallarza), intricate vocal harmonies, and plenty of attitude.

It’s just that this time, the attitude is encouraging, not raging. Nowhere is that more apparent than lilting album closer “Sing With Me.” Built around acoustic guitar, piano, and Cotterill’s voice, it’s an exhortation to “sing with me / or sing your own song / I don’t mind, just as long as you find / a voice.”

THE VENOMOUS PINKS (SBÄM)
If members of Bikini Kill and TSOL musically collided in a Russ Myer movie, the soundtrack scoring the scene would be orchestrated by The Venomous Pinks. Hailing from Mesa, Arizona the three-piece trio creates an unapologetically, uniquely addictive, in-your-face punk sound, that instantly makes the soul hurt so good, you can’t help but yearn for more.
Recently signed to SBÄM Records. They have blasted their way from the garage and into the spotlight, shredding the stage with some of punk rock's finest bands, such as: Bad Religion, Iggy Pop, Anti-Flag, The Bouncing Souls, just to name a few. Even though they have been touring all over the country, they have street cred to back them since their loyalty to their local roots runs deep. 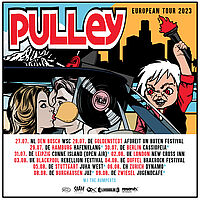 PULLEY is an American punk rock band from Simi Valley, California. Shortly after forming in 1995, the group signed to Epitaph Records. Over the next ten years, with the backing of the influential Los Angeles based independent label, the band issued five full length records, helping to build a cult following of supportive fans.
As time went on, PULLEY members, Scott Radinsky (vocals), Mike Harder (guitar), and Tyler Rebbe (bass), continued to tour and release new music regularly, eventually adding longtime friends Trey Clinesmith on guitar and Sean Sellers on drums.
In 2019, after more than two decades performing live, both nearby and in some of the further reaches the planet, PULLEY was honored to be inducted into the Ventura County Music Hall of Fame. PULLEY released their latest studio album "The Golden Life" on May 13, 2022 via SBÄM Records.